An ever-growing percentage of the world population lives in cities and this brings with it great challenges. As cities are forecast to continue to grow, the planning of the urban densification of the future is a key issue. This is also true for Switzerland, where the question of how much density is too much is a topic of general interest. Urban environments that strike a balance between accommodating a large number of people whilst retaining a pleasant atmosphere are those that are most likely to succeed. The project investigates this property of urban environments by examining how individuals perceive urban density. The aim of the project is to define a novel index of perceived urban density that can be used by different stakeholders in the planning disciplines.

Urban density has long been a key issue in the planning disciplines, and it has been the focus of individual research projects at ETH Zürich. However, whilst it is customary for architects and planners to consider urban density, there is often no consideration of how individuals might perceive such density. For example, in the planning disciplines, it is standard practice to calculate FAR (floor area ratio). However, the way in which the FAR ratio is perceived will vary from space to space. Whilst the FAR ratio is a useful index for how a project will fit with the existing surrounding urban density, it does not quantify how people might perceive such density. This is an underdeveloped aspect of research on urban density. Understanding how urban density is perceived is a critical aspect for designing the cities of the future. The proposed “Perceived Urban Density” index aims to be used in the optimization of existing planning models.

This interdisciplinary project is led by Beatrix Emo at the Chair of Cognitive Science. It is funded by the ETH Career Seed Grant.

Parameters
Six factors that influence perceived urban density are tested:
1. Visibility. The median visibility of each image was computed from a depth perception map created for the study.
2. Amount of building matter per image
3. Amount of visible road
4. Amount of visible sky
5. Amount of green space
6. Amount of vehicles
The photographs were analysed according to the six parameters, and for image properties of luminosity, contrast, and r/g/b values.

Method overview
The study was conducted as an online questionnaire using the Qualtrics online survey platform. The survey was an optional task at the end of the Massive Open Online Course (MOOC) “Future Cities” course run by the Chair of Information Architecture. Respondents of the questionnaire were students of that MOOC. During the questionnaire participants viewed two photographs of urban locations and had to choose which one was more dense.
The question participants responded to was: “Which location is more dense?”. We gathered a basic profile of the participants through a number of questions pre- (e.g.. where they currently lived, where they grew up, age, gender) and post- questionnaire (e.g.. what factors most influenced their judgement, how they ranked the importance of those factors etc.). Photographs used in the questionnaire were 12 stills taken from a 360 degree video of a route in central Zurich, Switzerland (fig. 4), that was created for another project (Hijazi et al., 2016). The large sample of possible images was reduced to 12 in order to be able to run a full pairwise comparison i.e. each participant viewed all possible comparisons of every photograph paired against every other photograph. The 12 images are the highest and lowest of each of the 6 parameters listed. The images are ranked according to how relevant they are for the perception of urban density.

Initial results
Close to 600 people have taken part to date (June 2018). An analysis of the first sample (190 participants) revealed that  visibility alone is
not enough to explain participants’ judgements. Participants reported four factors to be the most important when making their judgement: 1) number of visible buildings, 2) building height, 3) visibility, and 4) presence of green spaces. The number of visible buildings was reported as being the single most important factor when judging the perceived urban density of an image.

For further discussion of the initial results see the published article.

This real-world study tests the assumption that people’s subjective rating of perceived urban density is correlated to levels of crowdedness. Participants are guided along a predefined route in central Zurich. They are asked to rate their assessment of the urban density at key points along the route. The case study location is Europallee, a relatively new urban development in Zurich and close to the central train station; the level of crowdedness fluctuates greatly between peak and non-peak hours. The effect of crowdedness on participants’ subjective ratings of urban density is measured against the level of crowdedness at peak and non-peak hours. After the walk, participants rate photographs of locations of the route according to how dense they were.

This virtual reality (VR) study examines to what extent perceived urban density is a factor of crowdedness. The case study is identical to that of the real-world study: Zurich’s Europaallee. A newly-created virtual model of the area was shown to participants in a desktop VR behavioural experiment. As per the real-world study, Participants are asked to rate the perceived urban density at (the same) key locations along a predefined route. Participants view the urban area in one of two conditions: high or low levels of crowdedness. Again, after the walk, participants rate photographs of locations of the route according to how dense they were. 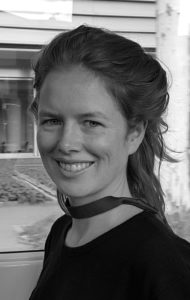 Beatrix Emo is a practicing architect and director of Spatialist Arch. She holds a PhD from the Bartlett School of Architecture, in which she explored how individuals experience urban spaces.

She is a senior lecturer at the Chair of Cognitive Science, ETH Zurich, an interdisciplinary group where she leads the focus on how people interact with the environment.

She is recipient of the ETH Career Seed Grant for this project.